The Cure Leukaemia Family came together for a fantastic afternoon to celebrate an extraordinary year for the charity at the annual CL Champions Awards at Malmaison in Birmingham.

At the end of another hugely successful fundraising year for Cure Leukaemia, which has allowed the charity to increase its influence in the fight against blood cancer, a host of awards were distributed on an afternoon when, in truth, all the nominees and supporters were winners. 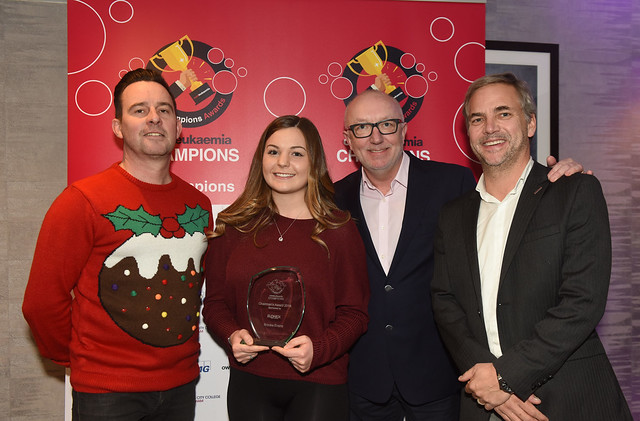 Over 100 guests were present to see the awards handed out in a ceremony hosted by Adam Joyce and Donna Alos, which included a speech from one of Cure Leukaemia’s co-founders Professor Charlie Craddock CBE outlining the importance of the charity in continuing to fund nurses and pioneering treatments for blood cancer patients.

Cure Leukaemia CEO James McLaughlin also addressed the audience and thanked them for their continuing support.

“This is the third year we have held our CL Champions awards, and each year they have grown and become better and better,” said James.

“It is a fantastic event where we are able to pass on our huge appreciation for the incredible fundraising and generosity of so many people who go above and beyond to support our charity.

“We never ever take any of that support for granted, and, with so many inspirational people in the room who have been fighting leukaemia, everyone can see why we remain so committed to raising money to help win the battle against this horrible disease.

“It was a wonderful afternoon spent with the CL family, and we would like to congratulate not only the winners and the nominees but thank everyone who continues to play such a crucial role in the life of the charity.”

There were some inspirational fundraisers and former patients honoured during the awards, with Brooke Evans receiving the Chairman’s Award, sponsored by Elonex, from Cure Leukaemia chairman Ian Allen.

Brooke recently started work as a nurse on the haematology ward at Birmingham’s Queen Elizabeth Hospital, the very place she was treated when being diagnosed with leukaemia at the age of 17, back in 2013.

Since then Brooke has been a fantastic ambassador and fundraiser for Cure Leukaemia, as well as completing her qualifications to start her career as a nurse at the Clinical Centre for Haematology, which she did in October.

“It was a lovely event and a huge surprise for me to win the award,” said Brooke.

“I am just grateful to everyone who has helped and supported me since I was first diagnosed, from Professor Craddock and all the medical staff to my family and friends.

“Cure Leukaemia do such a fantastic job to help patients like me, and that is why I have been so keen to try and help with their activities whenever I can.

“From my work as a nurse I can see just how much more there is to do and how many more patients need help, so I remain committed to helping Cure Leukaemia as much as possible in the future.”

Another patient who continues to inspire is Jenna Ostrowski whom, just over a year after being diagnosed with leukaemia, was part of Team Revolution which cycled the 500km from London to Paris in September.

Jenna, her finacee Matt Greenaway and friends and family have now raised over £25,000 for Cure Leukaemia, and she received the Cure Leukaemia Nurses Award at the event.

Mark Nicholas is another former leukaemia patient who has bounced back from his battle with leukaemia, following up last year’s Velo – which he completed just prior to undergoing a stem cell transplant – by being part of a team in this year’s London to Paris ride.

Marco’s Tour De Cure team raised over £22,000 for Cure Leukaemia from their involvement in L2P, and they were named CL ‘Team of the Year’ at the awards ceremony and award sponsored by Equilibrium Security.

The individual fundraiser of the year award went to Louise Cobbold, whom, along with husband Chris, has helped raise almost £20,000 for Cure Leukaemia.

Louise’s paintings of Wolves players have been sold through a variety of fundraising auctions, and she has also produced further work to benefit the charity, including a limited edition book and portraits of Beverley Knight and Robert Plant.

The award for the wackiest challenge of the year went to Dr Thomas Holdstock, from Drive System Design in Leamington Spa, who rode the small matter of 3,200 miles across America from Los Angeles to New York, and raised in excess of £8,000.

The Corporate Partner award went to The Binding Site, from Edgbaston, who continued their impressive support for Cure Leukaemia with employees taking part in the L2P ride, Brindleyplace Dragon Boat race and the Great Birmingham Run.

The generosity of the Haimes family and Andrea Tubb from Deutsche Bank in allowing Cure Leukaemia to become involved in the annual Bluebell Walk at Yew Tree Farm saw them receive the Community Fundraiser of the Year award.

Whilst the ‘Just One More’ award, given out in recognition of a fundraising event which takes place during Blood Cancer Awareness month in September, was picked up by the organisers of the Glamour & Goodness Ball.

A number of volunteers were honoured for their efforts throughout the year including Jaymz Goodman, Adam Joyce, Matilda Elwell and family, John and Debbie Riley, the Price family, Anne and Jason Green and Natalka Greenwood.

While there were also special recognition awards for Bik Singh, Nick Smith, Jon Rea, Isobel Farrell, Lizzie Dean and Jane Young, Gio Gonzalez and the Caboodle company, one of Cure Leukaemia’s corporate partners based in Crewe.

Lizzie, first diagnosed with leukaemia four years ago, celebrated her 30thbirthday at the awards and received not only a cake, but a rendition of ‘Happy Birthday’ from the assembled guests.

Nick Smith is the CEO of Elonex Outdoor Media, one of Cure Leukaemia’s charity partners.

Nick said: “I was very proud to receive the Special Recognition award from such a very special charity, and would dedicate to all the people who have supported Cure Leukaemia and myself over the last year.”

Dave Waldron, Donna Walsh and the team of nurses at the CCH received an Unsung Heroes’ award, as did Jess Hempshall, now approaching the final days of her epic 365-day Vlog championing all the fundraisers who have supported Cure Leukaemia.

Deutsche Bank awards have been handed out to Sharon Baker, Kerrie Rowson, Paul Shepheard and Mary Yucedal, the London to Frankfurt cycling team and the Borneo trek team.

Cure Leukaemia would like to congratulate all the nominees and thank everyone for their attendance at the awards, and also the sponsors - OWB Creative, Rewired, Equilibrium Security, Silks Solicitors, GMS Group, KPMG and South & City College in Birmingham

How funds raised for Cure Leukaemia help save lives

"Cure Leukaemia’s funding of the UK Trials Acceleration Programme (TAP) is a game-changer and increases the access for blood cancer patients to potentially transformative new therapies."